pictures along the way

August 9 7th day on the road

What a busy day we had today.  We started out with breakfast here at the KOA.  They have a reasonably priced meal, actually quite a number of choices.  That got us ready for our big adventure into downtown Seattle.

We took a city bus, #150 to be exact.  We walked about 1/2 mile to the Starbucks to catch it going downtown.  Cost is $2.25 a person one way and well worth it at double the price.  Parking is a pain and expensive in Seattle.

We got off at Pioneer Square.  This is old Seattle.  There is an underground tour here, which we took, that is quite interesting.  Seems after the city burned to the ground, the business district at any rate, it was rebuilt 15 feet higher.  That really is a very short version of what happened and if you google underground Seattle you will find some interesting information.  We were able to walk under the streets of current day Seattle and look into old stores, banks, hotels, etc. 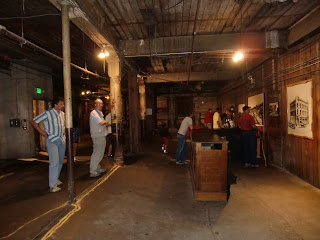 From underground, or rather old ground level, we went to the top of the Smith building.  There is an observation tower on the 35th floor with  a great view to the Olympia Peninsula and Puget Sound and the city. The building has some of the last manually operated Otis elevators and the lobby has been beautifully restored with marble and brass. 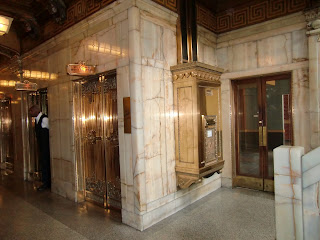 From Pioneer Square we walked down to the waterfront and along the docks to Pike Place Market.  This market is huge and actually spreads over several buildings.  I have never seen so many flowers for sale and so reasonably priced.  We saw the fish stall where they throw the fish but they didn't throw any while we were standing there.  We had our lunch at Pike Brewing Co., a craft brewery.

From Pike Place Market we walked to the Space Needle and had a Starbucks (what else) coffee there.  We then walked back through Belltown to the Westlake center which is a bus and light rail hub.  Here we caught the 150 back out to Kent. 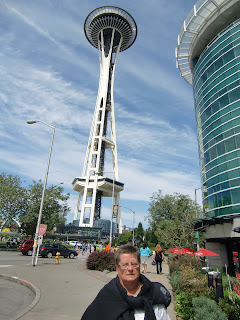 By this time Inge and Rufus had arrived and we took a picnic supper to their hotel and spent a couple of hours with them.  They were only 10 minutes away by car.  On our return to the KOA, we were treated to a spectacular view of snow topped Mount Rainier.

So tomorrow, we check in on the ship.  I will continue to write my blog but may not be able to post every day since internet connection on the ship is usually worse than dial up.  Check back frequently since I will post if I can get wifi when we dock.  Also, I am having problems downloading my extra pictures to Flickr so there aren't many at the top of this post.  I will add more if I can find a stronger internet connection.  Stay tuned.
Posted by Superoma at 20:42